You can find the open source program on MrS0m30n3’s Repository.

For window users, look for the installer.

Service Fabric was officially released about a year ago with the promise that it would be ported to Linux. The first Linux port, which is a preview, is out. You can find the directions on getting it up and running here.

Overview of cobbling together a P2P client.

If you need to install a specific patch via the CLI from a local server, use the above command.

Found a tool on Code Project that exports MS SQL Server Database schema and data into a Sqlite database. This is done through a ADO.NET connection.

I could not get the latest source on Github to work with SQL Server 2014, but the original program posted on Code Project works fine.

From the CLI run:

It’s not completely obvious that upgrading the partition means upgrading the OS on the controller. Use this if the Web UI gives you an error about running out of space.

To upgrade partition 0 in enable mode: 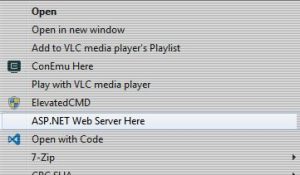 You can download here the updated registry entry for opening the ASP.NET Development Web Server using context menu in Explorer. The path has been updated to use Visual Studio 2015’s development web server.

This is used to quickly open a web server in a directory. After merging the registry, just do the following:

I have not tested this in Windows 10.

When setting up the guest network between an IAP with ClearPass, the older guides direct the user to setup a PreAuth role for guest and deny all traffic.

It’s assumed a firewall exception or something similar is automatically put into the IAP firewall rules to let the IAP, client, and the ClearPass server communicate, but this isn’t the case currently. In addition to denying traffic to all servers, you need to add additional rules to let the client communicate with ClearPass AND the IAP – or else radius requests will fail.

The PreAuth role looks similar to the following: